After a long cold winter we can welcome a variety of trees, shrubs and perennials that flower in May. Laburnum x watereri is a smallish tree (4 to 8 metres tall) with long racemes of bright yellow flowers in late spring. Note that all parts of the tree are poisonous including the seeds so not one to plant where small children or animals are around. However the flowers are stunning and if you had time to train over an arch you could have a mini Laburnum tunnel similar to the famous one at Bodnant gardens. 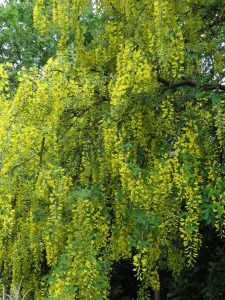 Clematis Montana is a climber, very vigorous and can drape itself over 4 fence panels! It is covered in pink or white flowers which are slightly scented and will flower in sun or shade. Best in a moisture retentive soil and if it gets too large, take the shears to it immediately after flowering. 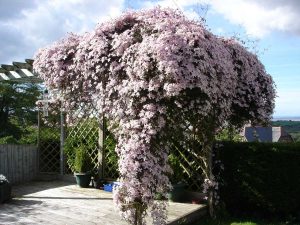 Shrubs flowering in May include Spirea Goldflame or Golden Princess. These low growing mounded shrubs are good in sun or partial shade and any soil. The new foliage has orange or yellow leaves in early spring and bright pink flowers in summer.

Perennials include the large flowered Paeonies in flower in May. They take time to clump up but look stunning. Will grow in sun or part shade and best in moisture retentive soils. Put plant supports around the foliage to keep it from falling over. On a smaller scale, the Silene vulgaris or Bladder Campion is perfect for the edge of a rockery or raised bed in sun. You can see it flowering on cliff paths in this country but it can do well in gardens too.

Jobs to be doing in the garden in May include doing the Chelsea Chop! Perennials that flower later in the season such as Heleniums or Astrantias can be cut back to delay flowering. If you have 2 plants cut one back and leave the other to extend the season.

Put straw around Strawberries to protect the fruit. Keep your potatoes earthed up to improve yields and continue to plant succession of salad seeds like lettuce and radishes for a continuous supply.

If you would like to visit gardens look out for gardens open under the National Gardens Scheme where all proceeds go to charities including Marie Cure Cancer Care and Macmillan Cancer Support.
Framley in Neston is open on 7th May with lovely mature woodland underplanted for spring, paths around the 5 acre garden will take you to a sunken garden and an intriguing pond in the woodland.
Tirley Garth near Tarporley is open on the afternoon of 13th and 20th May. This Arts and Crafts garden has 20 acres to explore, including thousands of Rhododendrons and Azaleas out in May.